Gambling Disorder is an addiction not unlike addictions to drugs, tobacco, and alcohol. Allowing legal betting on every play of every game of every sporting event is not a responsible way to regulate these products. The authors note that, “rigorous enforcement of age restrictions, barring in-game betting, regulating advertising, and creating basic affordability checks can eliminate most of the problems that all too often turn fun into tragedy and despair.”

The op-ed can be viewed here.

The Public Health Advocacy Institute previously argued to Ms. Healey that daily fantasy sports is illegal under Massachusetts law.  At this time, 10 states have taken that position.  Rather than take that approach, General Healey has staked out a moderate position of permitting the games while protecting consumers.  We argue that some of the most important protections in the proposed regulations may be impossible to effectively enforce.  Were it enforced, we argue, the industry’s business model would fail because it is built on practices that are unfair to the consumer.

Mark Gottlieb, the executive director of PHAI, discussed the impact of the Cease and Desist orders issued by New York Attorney General Eric T. Schneiderman  to shut down daily Fantasy Sports sites FanDuel and DraftKings in that state as well as related developments in Massachusetts.   This segment of New England Cable News’ “Broadside with Sue O’Connell” aired on November 12, 2015.
(Please excuse any commercial content with video). If video fails to play, click this link.

The Boston Globe has published on opinion piece by PHAI’s executive director, Mark A. Gottlieb, which summarizes the organization’s legal research concluding that paid Daily Fantasy Sports games are illegal under Massachusetts law. The piece, entitled, “Fantasy Sports Gambling is Illegal Under State Law,” explains the law and several reasons why it is important to enforce it.

Gottlieb argues that Daily Fantasy Sports games operated by DraftKings and FanDuel are a consumer rip-off as currently operated with almost all of the winnings going to full-time professionals.  He goes on to criticize Internet gambling as posing a threat to current and potential compulsive gamblers, and that it is inconsistent with the limited casino gambling authorized by the state.

Massachusetts is among several states considering regulatory approaches to these games.  Six states have banned them entirely.

A review by a prominent public interest law organization based in Boston revealed that online sports gambling operators like DraftKings are in “clear” violation of Massachusetts law.

The findings were included in an October 16th legal memo to Attorney General Maura Healey’s office that was prepared by the Public Health Advocacy Institute (PHAI) at Northeastern University.

PHAI, led by Northeastern University Distinguished Professor of Law Richard Daynard, is nationally-recognized for its effective legal advocacy combating the epidemics caused by tobacco and obesity.

“The lack of any action to stop the illegal business of online fantasy sports gambling and look the other way or wait until some future legislative action allows it sends the wrong message: that it is acceptable to engage in an illegal business now and, if it generates enough revenue, wait until lobbyists and corporate interests change its legal status,” said Mark Gottlieb, Executive Director of PHAI.

PHAI conducted its review after being contacted by Stop Predatory Gambling, a national government reform group against state-sponsored gambling operations.

The findings of PHAI’s review include:

“The internet gambling operations run by DraftKings and FanDuel are predatory, deceptive, illegal and coming at the expense of everyday citizens,” said Les Bernal, National Director of Stop Predatory Gambling.

As part of its mission to end youth access to lottery ticket vending machines in Massachusetts, the Public Health Advocacy Institute (PHAI) announced today that it has settled a lawsuit with Star Markets.

In March, PHAI, a non-profit organization based at Northeastern University, brought suit against the supermarket chain in the Massachusetts Superior Court on behalf of the Stop Predatory 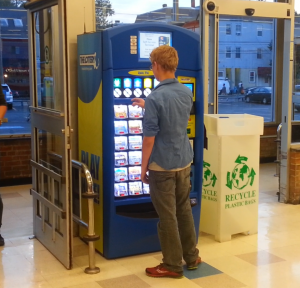 Gambling Foundation and Cambridge City Councilor Craig Kelley, who alleged that his teenage son had been able to use lottery ticket vending machines at two Star Market stores.

Under the settlement, Star Markets commits to using an age verification device that the Massachusetts Lottery Commission recently installed on all lottery ticket vending machines in Star Markets’ Massachusetts stores.  The device prohibits a person from using the vending machine until a driver’s license or government-issued identification card demonstrating that the user is at least 18-years-old is scanned.

Plaintiff Councilor Kelley observed, “My son and I are very happy to have been part of this effort to protect children in Cambridge and throughout Massachusetts.”

Andrew Rainer, Litigation Director of PHAI, applauded Star Markets for ensuring that the vending machines in its stores are not used by children.  “Unfortunately,” he noted, “there are still almost 1,200 older lottery ticket machines in the state that don’t yet have the age-verification technology,” He continued by noting that “some of those machines are located in kid-friendly locations, like bowling alleys and convenience stores.”

In 2014 and 2015, the Public Health Advocacy Institute (PHAI) conducted testing to determine whether kids could purchase lottery tickets from the vending machines located in a number of area supermarkets.  At markets in Cambridge, Somerville, and Arlington, Massachusetts, a teenage tester was easily able to purchase lottery tickets in every attempt.

Massachusetts law expressly prohibits the sale of lottery tickets to “any person under age eighteen.” Yet the Massachusetts Council on Compulsive Gambling reports that over two-thirds of teenage boys (aged 14-17) have gambled in the past year, and over half of teenage girls have done so. About a third of these children gambled by playing lottery games.

On March 10, 2015, PHAI sent Stop & Shop a legal demand under Massachusetts’ consumer protection law, on behalf of the father of the teenage purchaser, Cambridge City Councilor Craig Kelley, and on behalf of the national non-profit Stop Predatory Gambling Foundation, seeking steps to prevent children from using the lottery ticket vending machines in the company’s stores. According to the demand letter, selling the tickets to minors is an unfair and deceptive sales practice prohibited by law.

The action drew media attention and led to an editorial in the Boston Globe urging that the problem be addressed.  Representatives from Stop & Shop responded by working with the Massachusetts Lottery Commission to activate drivers’ license scanners in the lottery ticket machines, which operate to confirm that a lottery ticket purchaser is at least 18 years old before the machine will vend a ticket.  Stop & Shop informed PHAI last week that all of its lottery ticket vending machines would have these protections in place by the end of July, 2015.

PHAI staff spot checked Stop & Shop machines in 3 counties and found that its machines will, in fact, not operate without first scanning an adult driver’s license.

Cambridge City Councilor Kelley said he was pleased to see some progress made. “It’s a real problem,” Kelley said. “As a father and as a city councilor, I was truly shocked at how easy it was for a kid to buy tickets from these machines.”

Mark Gottlieb, executive director of PHAI, noted that “While Stop & Shop’s efforts to quickly address the problem are laudable, the vast majority of lottery ticket vending machines in the state don’t have driver’s license scanners. This includes many places like bowling alleys and convenience stores that are frequented by kids.” Gottlieb added that “we will continue to work to prevent sales of scratch tickets to kids through vending machines as a public health policy measure.” 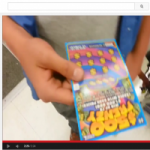 In recent months, PHAI has worked with concerned parents and a national anti-predatory gambling group to address youth access to instant lottery tickets through unattended vending machines. Fears around easy access to scratch tickets by kids grew when we found that a 14-year-old was able to easily purchase tickets from lottery vending machines in supermarkets in Arlington, Cambridge, and Somerville, Massachusetts.  Each attempt was made in the late afternoon without any effort to conceal the sale.  In each instance, the teenager was able to approach the machine and make a slow and deliberate purchase while customers and store personnel were nearby.

PHAI filed a lawsuit on behalf of the father of the teenager as well as Stop Predatory Gambling against one of the supermarket chains, Star Markets, and has initiated legal action against Stop & Shop. In the story published today in the Boston Globe, the Massachusetts Lottery Commission announced that some vending machines will now use a scanning technology feature to verify the age of purchasers through their drivers’ license or state-issued identification.  The executive director of the Commission, Beth Bresnahan, indicates that, “following some incidents of underage play that recently transpired . . . the Lottery is activating this feature across all of the approximately 500 PAT machines currently in the field to fully protect the integrity of ticket sales at retail locations.” “PATs,” or “Player Activated Terminals,” represent less than 30% of all lottery vending machines in Massachusetts.

The “incidents” Ms. Bresnahan referred to are, presumably, those that were brought to the attention of the Commission through PHAI’s litigation and coverage of the lawsuit by the Boston Globe as well as its strong editorial calling for effective age-restriction enforcement by the Commission.

It remains to be seen whether these new measures will be effective, particularly because they affect only a fraction of the vending machines that are in places frequented by youth.

Earlier this month, PHAI filed a lawsuit against Star Markets and issued to consumer rights demand to Stop & Shop, two major regional grocery chains, on behalf of the father of a young teen who was able to purchase lottery tickets from vending machines in those stores with alarming ease.  The national membership advocacy organization, Stop Predatory Gambling, is also a plaintiff to the action.

The purpose of the litigation is to ensure that steps are taken to prevent prohibited sales of lottery tickets, including particularly addictive scratch tickets, to children by either requiring that the vending machines are disabled until age verification is performed or by removing the machines from locations where children are present.  It certainly does not help matters when candy displays and other vending machines are adjacent to the lottery vending machines, as we observed when recording purchases made by the plaintiff’s son.

Our goal is straightforward  – lottery vending machines ought to be treated in the same manner as vending machines for cigarettes, the only other age-restricted product sold through automated vending. Cigarette vending machines in Massachusetts can only be places in adults-only locations and must use a lock-out device that prevents the machine from being used for a purchase until age-verification has taken place and the machine is temporarily unlocked by remote control.

There are important public health and policy reasons why products like tobacco and gambling products are not to be sold to youth.  Automated vending tends to undermine the age-restriction and what we learned about cigarettes vending in the 1990s applies to lottery vending in 2015.