In 2014 and 2015, the Public Health Advocacy Institute (PHAI) conducted testing to determine whether kids could purchase lottery tickets from the vending machines located in a number of area supermarkets.  At markets in Cambridge, Somerville, and Arlington, Massachusetts, a teenage tester was easily able to purchase lottery tickets in every attempt.

Massachusetts law expressly prohibits the sale of lottery tickets to “any person under age eighteen.” Yet the Massachusetts Council on Compulsive Gambling reports that over two-thirds of teenage boys (aged 14-17) have gambled in the past year, and over half of teenage girls have done so. About a third of these children gambled by playing lottery games. 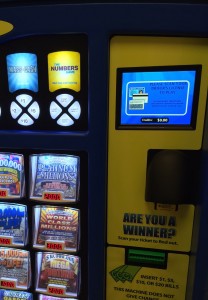 On March 10, 2015, PHAI sent Stop & Shop a legal demand under Massachusetts’ consumer protection law, on behalf of the father of the teenage purchaser, Cambridge City Councilor Craig Kelley, and on behalf of the national non-profit Stop Predatory Gambling Foundation, seeking steps to prevent children from using the lottery ticket vending machines in the company’s stores. According to the demand letter, selling the tickets to minors is an unfair and deceptive sales practice prohibited by law.

The action drew media attention and led to an editorial in the Boston Globe urging that the problem be addressed.  Representatives from Stop & Shop responded by working with the Massachusetts Lottery Commission to activate drivers’ license scanners in the lottery ticket machines, which operate to confirm that a lottery ticket purchaser is at least 18 years old before the machine will vend a ticket.  Stop & Shop informed PHAI last week that all of its lottery ticket vending machines would have these protections in place by the end of July, 2015.

PHAI staff spot checked Stop & Shop machines in 3 counties and found that its machines will, in fact, not operate without first scanning an adult driver’s license.

Cambridge City Councilor Kelley said he was pleased to see some progress made. “It’s a real problem,” Kelley said. “As a father and as a city councilor, I was truly shocked at how easy it was for a kid to buy tickets from these machines.”

Mark Gottlieb, executive director of PHAI, noted that “While Stop & Shop’s efforts to quickly address the problem are laudable, the vast majority of lottery ticket vending machines in the state don’t have driver’s license scanners. This includes many places like bowling alleys and convenience stores that are frequented by kids.” Gottlieb added that “we will continue to work to prevent sales of scratch tickets to kids through vending machines as a public health policy measure.”