Cheeseburger Bills or Common Sense Consumption Acts (CCAs) were spearheaded by the National Restaurant Association as well as the American Legislative Exchange Council (ALEC) and have been enacted in 26 states. Media coverage and legislative debates about CCAs were dominated by themes of personal responsibility and the need for tort reform to protect businesses from frivolous litigation. A recent study just published in the Food and Drug Law Journal by PHAI’s Cara Wilking, J.D. and Richard A. Daynard, J.D., Ph.D. analyzes the 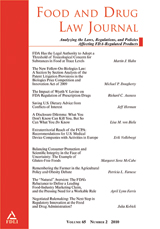 25 CCAs enacted between 2003 and 2012, and found they go well-beyond tort reform. Key findings from “Beyond Cheeseburgers: The Impact of Commonsense Consumption Acts on Future Obesity-Related Lawsuits” include:

Between 2008 and 2010, adult obesity rates increased in a total of 16 U.S. states, 11 of which are CCA states. The CCA states of Alabama, Louisiana and Tennessee are among the top five states with the highest rates of obesity, diabetes and hypertension. The current medical cost of adult obesity in the U.S. is estimated at $147-$210 billion per year, $61.8 billion of which is paid for by Medicare and Medicaid (Levi et al. 2012). The twenty-sixth CCA was passed in North Carolina in 2013 and they continue to be introduced in state legislatures. “A close analysis of CCAs reveals that the real point of the CCA proponents was not to prevent frivolous litigation, from which industry already had plentiful protection, but rather to limit legally and factually sound tobacco-style litigation, which might eventually have harmed industry’s bottom line and forced it to change its practices,”  said Cara Wilking, J.D.