As part of its 2012 Olympic Games marketing blitz, the Coca-Cola Company has assembled a “Coca-Cola 8-pack of Athletes” to  “serve as Coca-Cola ‘Ambassadors of Active Living’ to help encourage and inspire people to lead active, balanced lives.”[1] This group includes Jessica Long, a 2012 U.S. Paralympic Swimming Team nominee.[2] Ms. Long was born with fibular hemimelia, a condition of the lower legs, and became a double leg amputee at 18 months old.[3] Ms. Long’s athletic achievements are undeniable and her seamless inclusion in the marketing campaign is in line with equality and dignity for all. The tragic reality of lower limb loss, however, is that the majority of people suffering from non-traumatic lower limb loss are diabetic, and it is not medically appropriate for diabetics to consume sugar-sweetened beverages.

From what has been released of the campaign so far, the “Coca-Cola 8-Pack of Athletes” promotes full-sugar Coca-Cola. Ms. Long is no exception. Her commercial, entitled “Home,” shows her swimming as a child in her grand-parents’ backyard pool and moves through a range of global swim competitions.[4] The commercial ends with Ms. Long drinking from a bottle of full-sugar Coca-Cola. Cans of full-sugar Coca-Cola are shown next to the tagline “Open Happiness” and an announcer says, “Support our athletes with the Cola-Cola Olympic Series Collector’s Cans.” In other words, “Buy Coke!” 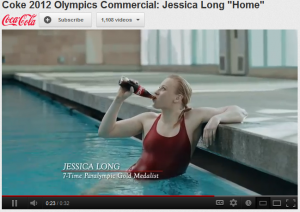 If one of the goals of Coca-Cola’s “8-pack of Athletes” campaign is to inspire people, including those suffering from limb loss, to lead active lives, then why does the campaign promote a product diabetics are under doctor’s orders to avoid?

Sugar-sweetened beverages like Coca-Cola are associated with obesity-related diseases including Type 2 Diabetes.[5] The Centers for Disease Control estimates that as many as 1 in 3 U.S. adults could have diabetes by 2050.[6] The links between diabetes and limb loss are stark and tragic:

As inspiring as Ms. Long’s journey is, for many people living with the loss of a limb there is no “happiness” to be found in a can of Coke—a fact the Coca-Cola Company seems to have overlooked.

[6] U.S. Department of Health and Human Services, Centers for Disease Control and Prevention, Press Release, Number of Americans with Diabetes Projected to Double of Triple by 2050, http://www.cdc.gov/media/pressrel/2010/r101022.html.

[7] U.S. Department of Health and Human Services, Centers for Disease Control and Prevention, National Diabetes Fact Sheet: National Estimates and General Information on Diabetes and Prediabetes in the United States, 2011, at 1, http://www.diabetes.org/in-my-community/local-offices/miami-florida/assets/files/national-diabetes-fact-sheet.pdf.

[8] U.S. Department of Health and Human Services, Centers for Disease Control and Prevention, National Diabetes Fact Sheet: National Estimates and General Information on Diabetes and Prediabetes in the United States, 2011, at 8, http://www.diabetes.org/in-my-community/local-offices/miami-florida/assets/files/national-diabetes-fact-sheet.pdf.