“This is the first time a non-profit organization has directly taken on the tobacco industry in court,” said Richard Daynard, University Distinguished Professor at Northeastern University School of Law and the President of PHAI.  “Big Tobacco kills more than 50% of the people who buy its products, and it has for years tried to deny its legal responsibility for this public health calamity. The Center for Public Health Litigation is going to ask the Massachusetts courts to hold the tobacco companies accountable in these two cases, and in more cases to be filed soon.”

The two cases were filed yesterday afternoon in the Middlesex Superior Court in Woburn. The first was brought for the family of James E. Flavin, Jr., a former executive of Filene’s and Staples, who died of lung cancer in 2012 after smoking Newport cigarettes for over 40 years.  Mr. Flavin had tried repeatedly to quit smoking, using almost every method he could find, including

The second case was brought for Patricia Greene, a Newton realtor, who was diagnosed with lung cancer in 2013, even though she had stopped smoking 25 years earlier.  Ms. Greene, like many others, had begun smoking as a result of being given free Marlboro cigarettes in downtown Boston when she was a teenager.  The companies named as defendants in Ms. Greene’s case are Philip Morris USA, Inc., manufacturer of Marlboro, and Star Markets Company, Inc. of West Bridgewater, owner of the store where Ms. Greene bought her cigarettes for years.

According to Andrew Rainer, the Director of the Center for Public Health Litigation, “Massachusetts is now the best state in the country in which to bring suit against the manufacturers and sellers of cigarettes, because of a 2013 ruling by the Massachusetts Supreme Judicial Court.”  In that 2013 case, Evans v. Lorillard Tobacco Co., the Court ruled that a manufacturer of cigarettes could be held responsible for the death of one of its customers, because it could have manufactured a cigarette that was safer and less addictive, but chose not to. The high Court’s decision also upheld an award of damages to the deceased customer’s family of $35 million plus interest. The case was later settled for $79 million.

The Center for Public Health Litigation, a project of the Public Health Advocacy Institute at Northeastern University School of Law, has launched an advertising campaign in Massachusetts to help inform victims of cigarette companies of their legal rights.   While Massachusetts is the best state in the nation to hold cigarette makers responsible in court for the decades of damage they have done after two landmark rulings from the state’s highest court, few Massachusetts victims realize that they are in a position to find some measure of justice in the courtroom.

The Center for Public Health Litigation seeks to inform victims of their rights and, where possible, provide or find legal representation to hold the industry liable.  The ad, reproduced below, will appear in newspapers and other media over the next several weeks.  It makes references to the $79 million payment by Lorillard Tobacco Company to the family of lung cancer victim Marie Evans. 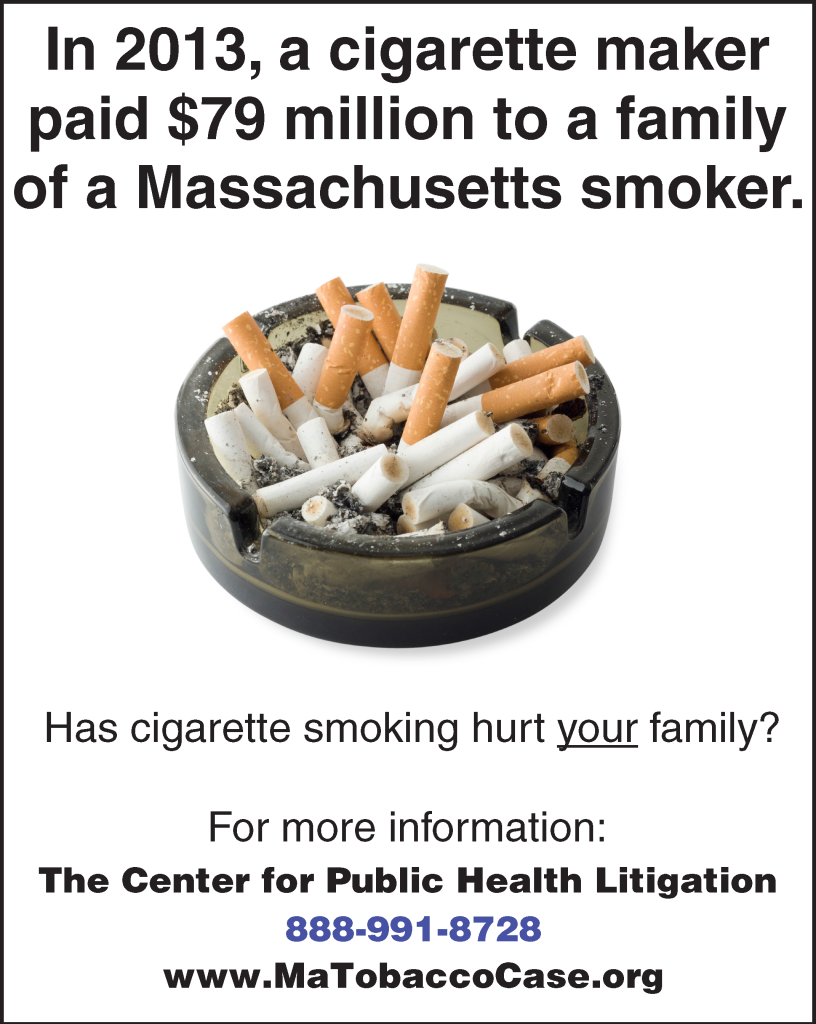 Unlike other advertising by trial lawyers, this is an effort by a non-profit public health-committed organization. It is one of several public health legal initiatives being undertaken by PHAI’s new Center for Public Health Litigation.