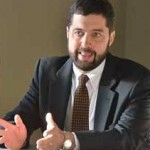 The April 30th edition of the Boston Globe featured an article authored by correspondent Peter Keogh entitled: “The Plight of the Smoking Man.”

The piece explained the difficulties that some smokers have faced in the wake of increasing restrictions on smoking, including in many multiunit residential buildings.  While the article spends some time exploring the perspective of members of a Cambridge-based smokers’ rights group, it gave the final word to PHAI’s Chris Banthin, who directs the Tobacco Control Resource Center at PHAI.  Most of Mr. Banthin’s time is devoted to educating landlords, tenants, condominium associations, and property management companies why and how to successfully implement smokefree policies through the Massachusetts Smokefree Housing Project.

This excerpt of the article includes Mr. Banthin’s response to some of the concerns raised by the smokers’ rights group members:

Chris Banthin is a lawyer working with Northeastern University’s Public Health Advocacy Institute . In a 2013 interview with WBUR, Helfer, the smokers’ rights group cofounder, describes the institute’s Tobacco Control Resource Center as “public health absolutists [who] feel that if we all do what they tell us to do, we’re going to have some kind of utopian state.”

Banthin, however, describes it as “an organization that seeks to use the law to improve public health.”

When it comes to regulating smoking in privately owned properties, Banthin sees no pressing need for legislation. “A lot of landlords are going smoke-free voluntarily,” he says. “Condos also. It’s a selling point.”

But aren’t they trespassing on the right to do what you want in your own home? Aren’t the restrictions more moralistic than a valid response to any health threat?

“As for secondhand smoke, the science is 100 percent irrefutable and widely accepted.”

Banthin sympathizes with those affected by bans. He advises landlords and other stakeholders on how to implement a no-smoking rule. Part of that includes engaging residents in the process.

“I have gone to hundreds of housing authority meetings,” he says. “I’m the first one that tells them. Most of them are upset, but most say, ‘OK, I recognize it’s important, so I’ll go outside.’ I think everybody gets it.”

On behalf of the Public Health Advocacy Institute at Northeastern University School of Law (PHAI), I am writing in response to Attorney General Maura Healey’s
request for comment on the proposed regulation of e-cigarettes sales. We at PHAI are dedicated to protecting and improving public health through law and legal policy. We enthusiastically support the proposed regulations to reduce youth access to e-cigarettes.

This alarming trend sadly is not surprising. E-cigarette advertisements appear everywhere, promoting brands like Blu, which suddenly have become as recognizable as Marlboro and Camel. Additionally, candy and other exotic flavored e-cigarettes are contributing to the growing popularity among youth. Tobacco industry documents discovered through litigation tell us that manufacturers used such flavors in the past to target sales at children. [3] Today, e-cigarette  manufacturers may be doing the same thing with flavors like Cotton Candy, Sweet Tart and even Unicorn Puke. [4] Unicorn Puke is a mash-up of candy flavors.

PHAI applauds Attorney General Healey’s effort to stop the sale of e-cigarettes to children. Although some municipalities already established similar youth access
protections, many have not. [5]  The thousands of retailers in these municipalities can legally sell to children of any age. Unattended vending machines and self-services displays, which lead to youth acquisition of tobacco products, are allowed. Even online retailers do not need to verify a buyer’s age, if the product is delivered anywhere in these cities and towns. Attorney General Healey’s proposed regulation would stop these retail practices.

The leadership shown by Attorney General Healey also challenges others to join her and develop a more comprehensive public health response to e-cigarette use. Our state legislators, state agencies, and public health partners working at the municipal level must also respond in a coordinated and sustained manner. The e-cigarette industry appears to be acting just like tobacco manufacturers did decades ago. Partly, this similarity can be explained by the fact that many cigarette manufacturers also manufacture e-cigarettes. [6] Another, perhaps more important reason we appear to be reliving the tobacco industry’s past is because we are letting it happen through our own inaction.

Consider just some of the differences in regulatory oversight. E-cigarette advertisements are on television and cable. Other tobacco products are not because it would be illegal. The 1998 Master Settlement Agreement, which prohibits the use of cartoons in tobacco advertising and tobacco brand sponsorships at youth oriented events, is not applied to e-cigarettes. [7]  Candy and fruit-flavored cigarettes are prohibited, [8]  but exotic flavored e-cigarettes are heavily promoted and sold in Massachusetts. We tax tobacco products to dissuade use and help pay for tobacco prevention programs. [9] There is no tax on e-cigarettes. We passed smoke-free workplace laws to protect against secondhand smoke exposure and to de-normalize smoking. [10] Except for a few municipalities, [11] no such equivalent protection exists for e-cigarette emissions.

Additionally, e-cigarettes emit other constituents that should raise concerns for the public’s health. Monitoring of e-cigarette emissions has found varying levels of toxins and carcinogens in different brands and product types. [14] The range is broad. Some brands emit trace amounts of carcinogens, while other e-cigarette products, like refillable tank systems for example, can produce levels of formaldehyde comparable to combusted tobacco products. [15] Currently, there is no regulation of liquid or gel solution in e-cigarettes or how they are vaporized. Put simply, e-cigarettes are not a cessation product designed to end the harm caused by tobacco use or nicotine addiction.