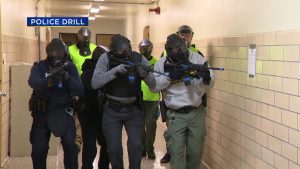 Sarah Peck, Director of PHAI’s #UnitedOnGuns initiative, recently authored an opinion piece published by the South Florida Sun Sentinel entitled: Profiting from protecting kids is wrong. Halt active shooter drills in schools. In it, Ms. Peck raises the concern, shared by many, that active shooter drills in schools can traumatize children.  She notes that 42 states have passed laws mandating these school drills and that a $3 billion industry has emerged to support implementation of these laws.

Such drills produced by for-profit companies are often designed to be realistic and may feature the sounds of gunshots and even the use of fake blood.  Ms. Peck shared one particularly disturbing example:

In one recent drill, teachers were lined up against a wall and shot — execution-style — with plastic bullets.

Such trauma-inducing practices are unacceptable in our schools, according to Ms. Peck.  The key, she maintains, is prevention, and she cites a program called “know the signs” as an example of an approach that may help identify kids in crisis who might pose a risk.