What’s Missing From This Picture? 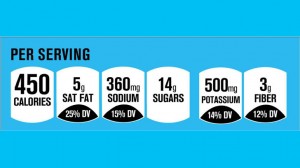 GMA and FMI’s joint Fact Sheet states : “Under the Nutrition Keys program, participating food and beverage companies will place an icon on the front of their products that displays calories, saturated fat, sodium and sugar per serving. The icon will also tell consumers how each serving of a product contributes to their overall diet based on recommended daily nutrition intake as established by the federal government’s U.S. Dietary Guidelines, and expressed as percent of daily value.” The examples used by GMA/FMI provide a percentage of daily values for fat, sodium and nutrients but DOT NOT provide a percentage that corresponds to the percentage of a 2,000 calorie per day diet (sugar is not labeled because there is no estalished percent daily value for sugars at present). None of the graphic examples used by GMA/FMI or the American Beverage Association include a bubble for the percentage of an average 2,000 calorie per day intake.

When it Comes to Calories, “Nutrition Keys” Differs from the UK GDA System

The GMA/FMI Fact Sheet states “Nutrition Keys is in use on a voluntary basis in the United Kingdom, where it enjoys wide consumer acceptance. In the U.K., 83% of consumers are aware of the icon and 63% report that they use the information summary when they make decisions at the point of purchase.” While the GMA/FMI do not provide an example of the precise labeling system referenced, a similar U.K. system (the GDA sytem) contains a % of average daily calories in the calorie bubble. The GMA/FMI differs materially from the U.K. scheme–calories are not put into the context of a % of average daily calorie intake.

Nothing New & A Step Backward

GMA and FMI’s joint Press Release describes the initiative as “the most significant modernization of food labels since the Nutrition Labeling and Education Act of 1990. The scheme, however, appears to be the exact same scheme employed by General Mills and Kellogg’s on their cereal products  for the last several years.  Those schemes, at least initially, contained a disclosure of the % of average daily calorie intake–the GMA/FMI scheme does not.