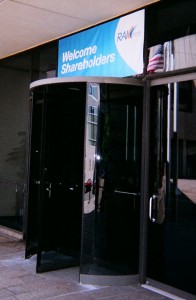 Three key issues were taken up at the 2012 Reynolds American Inc. (RAI) Annual Shareholders Meeting in Winston-Salem, North Carolina on May 3rd.

First, the issue drawing the most public attention was the company’s dealings with groups representing farm workers who toil under dangerous conditions and provide the tobacco that brings prosperity to the company and its key executives. At least 20 individuals who attended the meeting dominated the question-and-answer session, urging the company to meet directly with the Farm Labor Organizing Committee (FLOC)  after many years of failing to achieve such a meeting. Reynolds American CEO Daniel M. Delen publicly pledged that he would be willing to participate in such a meeting. Dozens of protestors outside the building underscored the message of the supporters of the human rights of tobacco farm workers.

A second issue was contained in the shareholder resolution that called on RAI to establish a special ethics committee to examine the company’s marketing practices. The purpose of this special committee is “to ensure shareholders that its products and product promotions, as far as is possible, not undermine efforts of governments at any level to adopt laws and practices that will free Americans from the negative consequences of use of our tobacco products.”

In addition to commenting on the text of the resolution, Father Michael Crosby denounced RAI’s heavy-handed campaign to oppose California’s Proposition 29, which would raise that state’s cigarette excise tax by $1 per pack and increase taxes on cigars and pipe tobacco from 31.73 percent to 54.89 percent. If passed by the voters, the proposal would raise about $735 million annually, most of which would go toward cancer research.

The shareholder resolution was defeated, according to the preliminary tally reported at the meeting, with 6.4 million shares in favor, 418 million shares opposed and 6.3 shares abstaining.

The third key issue was litigation, specifically RAI’s “litigation progress” – or lack thereof – in dealing with the Engle Progeny cases in Florida. During the business presentation by Mr. Delen, RAI’s CEO stated that, since 2010, RAI had been “successful” in two-thirds of the Engle Progeny trials. Such “successes” included not only defense verdicts but also – for the first time publicy stated in this author’s memory at any tobacco company’s shareholders meeting – mistrials (such as when a jury is deadlocked without being able to reach a verdict).

In 2009, a Florida jury awarded $3.3 million in compensatory damages and $25 million in punitive damages against Reynolds American in a case involving the death of Benny Ray Martin, the husband of Mathilde Martin. Her case is one of thousands of “Engle Progeny” lawsuits in Florida, cases that followed the landmark 2006 ruling by the Florida Supreme court in Engle v. Liggett Group, Inc., 945 So. 2d 1246 (Fla. 2006). After losing on appeal at every stage in the Florida’s state court system, RAI filed a petition for certiorari with the Supreme Court of the United States.

In arguing in December 2011 that its petition for a writ of certiorari should be granted, Reynolds’ attorneys (Paul D. Clement of Bancroft PLLC, Gregory G. Katsas of Jones Day and Eric E. Murphy of Jones Day) claimed that in “their conduct of Engle progeny litigation, the Florida state courts are engaged in serial due-process violations that threaten the defendants with literally billions of dollars of liability.” (emphasis added) Moreover, “the massive liability imposed on the Engle defendants – which currently stands at over $375 million in adverse judgments – will… steadily increase as Engle progeny trials continue with no end in sight.” (emphasis added).

RAI’s attorneys’ description of doomsday for the company became reality on March 26, 2012 when the Supreme Court announced that it would not consider RAI’s appeal in the Martin case. As I described at the time, “At long last, Reynolds American and the other major tobacco companies will be held accountable for their massive and reprehensible misconduct that harmed thousands of Florida smokers. As Reynolds’ own lawyers have concluded, denial of its cert petition is a very big deal indeed.”

Citing the question I asked at the 2011 Reynolds American Shareholders Meeting about the Martin case, the response I received from Mark Holton, RAI’s Executive Vice President and General Counsel, that he was “confident that the Engle process violates due process” and that the company’s legal arguments were strong and would ultimately prevail, and the fact that on March 26, 2012 the U.S. Supreme Court refused to consider RAI’s appeal of the $28 million verdict, this RAI shareholder from Massachusetts asked the following question:

“Given how Mr. Holton got it wrong last year about this important case, why shouldn’t investors and shareholders be skeptical when they hear pronouncements by Reynolds American management about tobacco litigation?”

In response, Mr. Holton acknowledged what the Supreme Court had done regarding the Martin case, but cited what he called “encouraging” developments with two appeals of plaintiff verdicts in the state court system in Florida. This included a March 30th ruling by Florida’s Second District Court of Appeal affirming a $2.5 million wrongful death verdict against Reynolds American and Philip Morris USA. In that appeal of the Douglas case, the Court of Appeal also certified the following question to the Supreme Court of Florida: “Does accepting as res judicata the eight Phase I findings approved in Engle v. Liggett Group, Inc., 945 So. 2d 1246 (Fla. 2006) violate the tobacco companies’ due process rights guaranteed by the Fourteenth Amendment of the United States Constitution?”

Mr. Holton notably did not address the doomsday scenario outlined by his company’s attorneys who filed the writ for certiorari. So, in a span of just five months, this RAI shareholder received from the company diametrically polar opposite predictions concerning the future of tobacco litigation, depending on which side of the Reynolds American corporate mouth was talking.