This week, as millions of American children return to classrooms and lunchrooms, moms and dads are trying to sort out which pre-made food products are conducive to learning and a healthy diet and which are flashy, sophisticated packages of junk food.

Nestlé, which deems itself “the world’s leading nutrition, health and wellness company” has teamed up with Kraft Foods to sell three of its candy brands (Nestlé, Crunch, Nerds, and Kit Kat) in Kraft’s Lunchables. Nestle candy is included in “Lunchables with Juice” varieties containing “Light Bologna and American Cracker Stacker,” “Pizza with Pepperoni made with Pork, Chicken and Beef,” and “Nachos, Cheese Dip and Salsa.” A picture of  Nestlé candy is featured prominently on Lunchables product packaging: 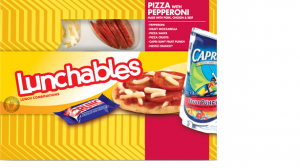 The inclusion of Nestlé candy in these products is perplexing because Nestlé maintains a health and nutrition-focused website for parents called NestleFamily.com where it proffers tips for packing healthy school lunches by Dr. Christine Wood.  A look at four of Nestlé’s healthy lunch tips reveals that Kraft Lunchables products with Nestlé candy fall short.

Tip two: “Try to limit the frequency of using processed luncheon meats because of the nitrates in them. (Nitrates are preservatives found in many cooked and cured meats and should be given sparingly to young children.)”

Tip three: “Your kids will be more interested in healthy eating if they get involved in the preparation.”

NestleFamily.com says “Packing a healthy lunch for your kids can be a challenge!” It sure can. Especially when food manufacturers talk healthy foods and walk junk.