[PLEASE NOTE: This blog post was prepared prior to unexplained changes to Coca-Cola’s database of its funding of  organizations in the United States. The information reflects the dollar amounts initially reported by Coca-Cola in the Fall of 2015.]

For years, the month of February has been the kick-off of the Coca-Cola Company’s sponsorship of the National Heart Lung and Blood Institute’s (NHLBI) Heart Truth campaign. Heart Truth began in 2002, with the goal of raising awareness that heart disease is the number one killer of women. The campaign fits within the general mission of NHLBI to collaborate with a range of stakeholders to promote the prevention and treatment of heart, lung, and blood diseases. As part of the Department of Health and Human Services (HHS), NHLBI provides research funding and conducts outreach with the public to improve the public health. As a federal agency, NHLBI is subject to legal limits on its use of funds and HHS’s ethical guidelines for co-sponsorship of events. These guidelines are meant to guard against conflicts of interest that would undermine the primary mission of NHLBI. Coke’s corporate funding disclosures in the Fall of 2015 indicate that as public pressure on NHLBI built, Coke shifted the bulk of its heart health giving to a tight circle of non-governmental heart health organizations consisting of the American College of Cardiology, the Preventive Cardiovascular Nurses Association, the American Dietetic Association, and Brigham and Women’s Hospital in Boston, MA. 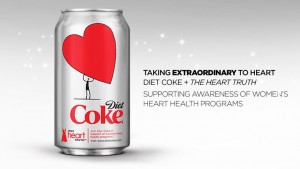 From 2008 to 2014, The Coca-Cola Company, under its Diet Coke brand, was the Heart Truth campaign’s most visible co-sponsor: Despite the fact that HHS’s ethical guidelines place a particular emphasis on avoiding the appearance of product endorsement, Heart Truth logos were printed on billions of Diet Coke cans, heart health-themed Diet Coke ads ran during the Olympic Games, Coke enlisted high-profile celebrities like Heidi Klum to appear at Heart Truth events, and Diet Coke beverages were distributed at community heart health screenings.

NHLBI’s partnership with Coke drew ire from the public health community because it seemed untenable to partner with a company that also sells sugary drinks linked to obesity and heart disease. The fact that the partnership focused on Diet Coke was particularly problematic because it closely followed the release of the NHBLI-funded Framingham Heart Study’s findings that consumption of diet soft drinks appeared to be linked to increased risk factors for heart disease.

In 2010, the Center for Science in the Public Interest (“CSPI”) called on the government agency to sever its ties with Coke, but NHLBI publicly refused to do so. The primary rationale NHLBI gave for keeping Coke as a corporate sponsor was that the company allowed the agency to extend its reach to get out the message that heart disease is an important health concern for women. CSPI’s challenge to the program led to a public debate about the role of Coke in NHLBI’s educational activities.

In 2010, PHAI requested Coke’s contracts with the NHLBI pursuant to the Freedom of Information Act (FOIA) and received copies of contracts the company entered into with Ogilvy Public Relations Worldwide on behalf of the NHLBI from 2007, 2008, 2009 and 2010:

At the time, the dollar amounts in these contracts were redacted as proprietary information.

Coke’s recent funding disclosures date back to 2010, and show that in 2010 the company paid NHLBI $440,000 in support of a fashion show to promote heart health awareness. Through its contracts with NHLBI for the 2010 Heart Truth Fashion Show, Coke was granted:

-Exclusivity as the only carbonated beverage category event sponsor

-Full use of the NHLBI Heart Truth logo in any Coke marketing, advertising and or promotional materials or activities

-Assistance from NHLBI’s agent, Ogilvy, in the “development of heart health content and messages” for its use

-“Access to heart health experts and spokespeople to serve on Coca-Cola’s behalf including at Coca-Cola luncheons, ambassador program, opinion shaper and other customer/VIP events”

The breadth of the rights granted to Coca-Cola is in keeping with a typical private arrangement for event sponsorship, but seems startling in the context of a government run educational campaign. Ogilvy Public Relations Worldwide was awarded multi-year government contracts from the NHLBI totaling $11.9 million to execute the Heart Truth campaign on its behalf. Organizers of complex, national educational campaigns must work with sponsors to ensure events run smoothly. The contracts Ogilvy entered into on NHLBI’s behalf with Coke, however, reveal a situation where it appears that NHLBI was granting Coke rights to advance the company’s commercial agenda.

In March of 2010, PHAI wrote a detailed letter to the Associate General Counsel for Health and Human Services (HHS), asking that it review NHLBI’s relationship with Coke pursuant to the agency’s written ethical guidelines for co-sponsorships of events. In its reply, HHS cited a general provision of the Public Health Service Act granting NHLBI the authority to conduct health promotion campaigns and deferred decision-making about the appropriateness of Coke’s co-sponsorship of the Heart Truth campaign to NHBLI. Despite NHLBI’s public defense of Coke in response to CSPI’s letter and apparent agency inaction after PHAI’s request to review the relationship, after 2011 Coca-Cola shifted its support for Heart Truth and other heart health activities sharply away from the NHLBI.

According to Coke’s initial funding disclosures in the Fall of 2015, between 2010 and 2015, Coke’s total funding of heart health-related organizations and educational activities was approximately $8 million (click here for a detailed description). $7.8 million of these funds went to just five organizations: NHLBI (via Ogilvy and the Foundation for the National Institutes of Health), the American College of Cardiology, the Preventive Cardiovascular Nurses Association, the American Dietetic Association, and Brigham and Women’s Hospital in Boston, MA. NHLBI-related funding of the Heart Truth totaled $1.9 million with Coke’s contributions peaking at $1 mil in 2011. Starting in 2012, Coke sharply reduced its direct NHLBI support and shifted its gifts to private organizations not subject to FOIA requests. 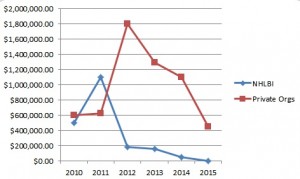 Coke’s Heart Truth partnership with NHLBI was created under the leadership of then NHLBI Director Elizabeth (Betsy) Nabel, MD. Dr. Nabel is a cardiologist who left public service in 2010 to become President of Brigham and Women’s Hospital (BWH) in Boston, MA. Dr. Nabel traveled to Canada to be an official 2010 Olympic Games Torchbearer for Coke and spoke glowingly about her relationship with Coke. 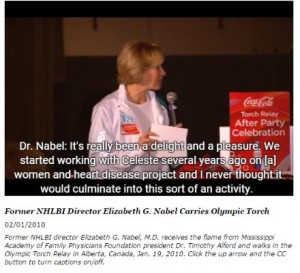 It turned out that Dr. Nabel was not the only Coke heart health partner at BWH. She was joined by Dr. JoAnne Foody, MD, the Medical Director of BWH’s Pollin Cardiovascular Wellness Center. Dr. Foody is featured as a heart health expert in continuing education presentations produced by Coca-Cola’s Beverage Institute for Health, and in 2011 was selected to serve as the Editor-In-Chief of the American College of Cardiology’s (ACC) CardioSmart initiative. ACC received $2.6 million in Coke funding for CardioSmart and community screenings between 2010 and 2015. CardioSmart is described as “a patient education site committed to providing accurate, un-biased heart health information in an advertising-free environment.”

Coke clearly valued its relationship with Dr. Foody. As was reported in 2012, she was included in an email sent from Coca-Cola executive Helen Tarleton to a list of “partners” in various health organizations sharing the company’s position on a proposed New York City ordinance to limit soda portions. The email asked Dr. Foody to disseminate a Coke infographic downplaying the role of sugary drinks in the obesity epidemic. Coke’s direct request to advance a policy position potentially at odds with CardioSmart’s mission to educate heart health patients is a striking example of the depth of the relationships it formed with its public health “partners.”

In 2013 and 2014, Dr. Nabel and Dr. Foody leveraged their relationship with Coke into $1.2 million dollars of funding for a BWH cardiovascular health initiative called ClimbCorps to promote stair climbing for heart health and provide heart health education. Dr. Foody served as the ClimbCorps’ Medical Director. In 2013, Coca-Cola executive Helen Tarleton personally attended a ClimbCorps event with Dr. Nabel and Dr. Foody. The program no longer has an active website and all links to ClimbCorps redirect to the BWH general website. The program’s emphasis on physical activity fit well within Coke’s overall obesity strategy to focus on physical activity as opposed to diet. 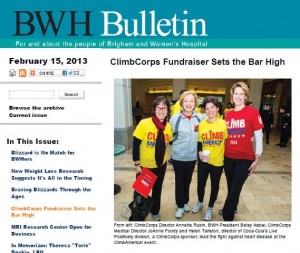 Coke’s funding disclosures paint a more complete picture of how it operated and who it turned to when it needed to shift its giving from a highly scrutinized government agency to private organizations. In response to public pressure, Coke has since bowed out of the heart health initiatives it funded over the past five years:

In the process, millions of dollars were spent in ways that Coke itself now admits were not adequately transparent, and were inappropriate given the company’s overwhelming commercial interests in the health issues addressed.

There is no question that funds are desperately needed for programs to address crucial diet-related public health issues like cardiovascular disease in women. Coke spent $8 million on heart health education in five years (not including the in-kind contributions it made via specially printed product packages, Heart Truth dedicated websites and television commercials), while the federal government spent just $17 million on the Heart Truth campaign over ten years. The problem with Coke’s heart health spending is that its primary goal has been to downplay the role of sugary drinks in the obesity epidemic and to position diet beverages as healthy alternatives. Neither of these positions is fully supported by actual evidence and, as such, are in conflict with the mission of truly unbiased cardiovascular health initiatives.

There remain many unanswered questions about Coke’s heart health “partnerships.” To what extent did Coke’s initial participation with NHBLI’s Heart Truth campaign give the company legitimacy through what appeared to have been the government’s imprimatur and grant it access to the private organizations it subsequently partnered with? What other requests for political support did the company make of the heart health organizations it funded? How did Coke’s funding impact the heart health activities of the organizations it funded in terms of dietary recommendations to the public or support for public health policies at odds with Coke’s agenda? The most important question left in the wake of Coke’s co-optation of the Heart Truth campaign is this: Moving forward, how can the United States create and sustain unbiased funding mechanisms for the crucial public health issues of our time?