In response to a recent study finding that nationally televised fast food television advertisements to children by McDonald’s and Burger King from 2009-2010 focused primarily on toys, movie tie-ins and branding, CARU Director Wayne Keeley stated that “[b]oth companies have always respected CARU’s recommendations by discontinuing the challenged ads, and pledged to take into account CARU’s recommendations in their future advertising,” and went on to note that there haven’t been any recent cases involving either of the two companies.

A look at CARU case reports tells a different story. Since 2005, McDonald’s Corporation has been cited by CARU six times for violations of its premium guideline. Just one of these cases, from Sept 2012, was decided in McDonald’s favor. The most recent CARU case against the company in December 2012 found the premium guideline had been violated. Each time McDonald’s pledged to take CARU guidelines into consideration in future advertisements. Burger King also was found to have violated CARU’s premium guideline in 2011. 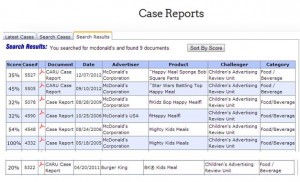 Fast-food companies emphasize toy giveaways and movie tie-ins rather than food products when marketing to kids on television, which suggests that industry is not abiding by its self-regulatory pledges for child-directed marketing, according to a study co-authored by the Geisel School of Medicine at Dartmouth and the Public Health Advocacy Institute at Northeastern University School of Law. The study, “How Television Fast Food Marketing Aimed at Children Compares with Adult Advertisements,” is published in PLOS ONE and found that among ads for children’s meals, toy giveaways appeared in 69 percent of ads and movie tie-ins were used in 55 percent of ads.

“Fast-food companies use free toys and popular movies to appeal to kids and their ads are much more focused on promotions, brands, and logos—not on the food,” said James Sargent, Professor of Pediatrics at the Geisel School of Medicine at Dartmouth and the lead author of the study. “These are techniques that the companies’ own self-regulatory body calls potentially misleading and it’s a clear sign that they’re not living up to their pledges about marketing to kids.”

Sargent and his colleagues examined all nationally televised ads for children’s meals by leading fast-food restaurants for one year, from July 1, 2009 to June 30, 2010. They compared ads for kids with ads for adults from the same companies to assess whether self-regulatory pledges for food marketing to children had been implemented.

Leaders of the food and beverage industry have publicly recognized the need to reform marketing practices targeting children. In 2006, the Council of Better Business Bureaus launched the Children’s Food and Beverage Advertising Initiative (CFBAI), a voluntary pledge by major U.S. food manufacturers to advertise only healthier products to young children. McDonald’s and Burger King participate in the CFBAI. Both companies also have pledged to abide by marketing guidelines set by the Children’s Advertising Review Unit, which include a provision stating that food—not toys or other promotions—should be the primary focus of ads directed at kids.

“This study adds to a growing body of research suggesting that there’s a big gap between what industry has promised and what they’re actually doing when it comes to marketing to kids,” said Cara Wilking, J.D. of the Public Advocacy Institute at Northeastern University School of Law. “There comes a point when intervention by a regulatory body like the Federal Trade Commission or state Attorneys General is needed to address self-regulatory failures. These findings suggest we’ve reached it with respect to fast food marketing to kids.”

A recent report by the Federal Trade Commission found that among all U.S. food and beverage companies, fast-food companies spent the most on marketing directed at youths ages 2 to 17—more than $714 million in 2009. The report also found that fast-food companies have dramatically increased their spending on television ads and new media targeting kids ages 2 to 11. Further analysis of that report shows while some fast-food restaurants slightly improved the nutritional quality of kids’ meals, the number of child-directed television ads for other higher-calorie meals and menu items more than doubled from 2006 to 2009.

This practice guide examines the court’s lengthy 2006 decision in the U.S. Department of Justice’s racketeering suit against the major American cigarette manufacturers.  It highlights the numerous actions of these manufacturers cited in that opinion that may constitute violations of the 1998 Master Settlement Agreement, and it calls for enforcement actions to remedy such violations.