The Ultimate Fighting Championship (UFC) has its roots in “cage-fighting” and was long considered too wild and violent for mainstream sports fans. Not long ago cage-fighting was shunned by parents, banned by states and rejected by broadcast networks and cable operators for its brutality. While cage-fighting remains outlawed in some states, it has been recast as mixed martial arts (MMA). UFC has successfully migrated from pay-per-view television to the Fox Television broadcast network. Despite the UFC’s efforts to rehabilitate its image, bouts are still held in an eight-sided cage (called the “octagon”) where fighters’ blood is commonly spilled. The UFC has an official energy drink called Xyience Energy. NOS energy drink (a Coca-Cola Company product) sponsors MMA champion Georges St-Pierre and has built an ad campaign around the UFC champion. UFC fighters appear on cans of Xyience, attend promotional events and wear the Xyience logo. According to the president of Xyience, UFC fans, who are two thirds male, between the ages of 21 and 34 are the company’s target demographic.

Energy Drinks Are Associated with Increased Risk-Taking, Including Fighting 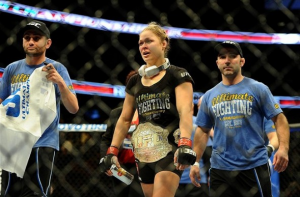 UFC champion Ronda Rousey holding a can of Xyience after a 2013 bout in California.

In order to protect the safety of combatants, Arkansas, Florida, Michigan, Ohio, Oklahoma, and Wisconsin ban the use of energy drinks during professional or amateur mixed martial arts bouts.  Click here for a legal summary of these policies.  State athletic commissions require that a physician be present ringside during mixed martial arts bouts. The Association of Ringside Physicians, a group created “to develop medical protocols and guidelines to ensure the safety and protection of Professional Boxers and MMA Athletes,” stipulates that “only water or an approved electrolyte drink by the Commission may be consumed during the bout,” and “[c]ontestants should not consume energy drinks on the date of the contest.” 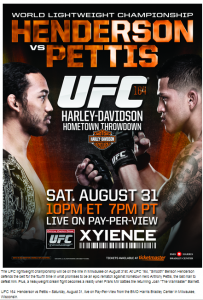 This poster is featured on the Xyience website advertising a bout in Milwaukee Wisconsin. Wisconsin bans the use of energy drinks during MMA fights

Marketing energy drinks alongside cage-fighting warrants further investigation as a potentially unfair and deceptive trade practice under state and federal consumer protection law. A deceptive trade practice is a marketing tactic that is likely to mislead a reasonable member of the target audience and is material to the consumer’s decision to purchase the product. A reasonable member of the target audience of UFC fans would be misled into thinking that energy drinks are permissible during bouts. The reasonable consumer likely does not know that energy drinks are actually banned during bouts in six states and by the Association of Ringside Physicians. This omission is not easily discovered by consumers as one has to search state athletic commission regulations to find such information. The cross-promotion of UFC and energy drinks is material to the target demographic because there are a number of energy drinks on the market that do not cross-promote UFC. Placing the UFC logo or pictures of a UFC fighter on a can and sponsoring top UFC fighters is intended to drive UFC fans to select drinks like Xyience and NOS over other energy drinks.

Energy drink cross-promotion of UFC may also be considered an unfair trade practice in jurisdictions that focus on marketing that violates established public policies. As noted above, six states and the Association of Ringside Physicians ban the use of energy drinks during fights. Marketing that associates energy drink consumption with UFC violates these established public policies and presents a potential health harm to the target audience of consumers—a demographic of energy drink users research has shown already is susceptible to engaging in risky behavior like fighting.

Xyience and NOS should abandon their association with UFC and MMA. Current marketing campaigns are unfair and deceptive to the target audience of consumers. Consumers deserve the same protections six states and the Association of Ringside Physicians extended to professional and amateur MMA athletes when they banned the use of energy drinks during bouts. 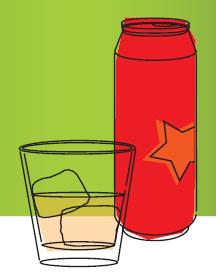 Today, the Public Health Advocacy Institute (PHAI) at Northeastern University School of Law in Boston, released a report entitled Energy Drink Self-Regulation chronicling the ways in which major energy drink makers openly violate the self-regulatory guidelines issued by their own trade association, the American Beverage Association (ABA).  A review of energy drink marketing, promotion, and employee recruiting materials from 2012 found that despite self-regulatory pledges to the contrary, energy drinks are promoted as mixers with alcoholic beverages and often marketed in ways that foster confusion with sports drinks. Energy drink makers have come under growing scrutiny by state and federal regulators as reports of irresponsible marketing practices and adverse health events associated with energy drink consumption have come to light. The U.S. Senate Committee on Commerce, Science and Transportation will hold a hearing on Wednesday, July 31, 2013 at 2:30 p.m. titled, “Energy Drinks: Exploring Concerns About Marketing to Youth.”  Major energy drink makers were asked to submit information about marketing to youth in advance of the hearing. PHAI’s findings reveal that regulatory oversight is needed as self-regulatory pledges are not being complied with.

Two of the ABA’s core self-regulatory principles are to refrain from marketing energy drinks as mixers for alcoholic beverages and to not market energy drinks as sports drinks. Red Bull is the leading energy drink company. Red Bull trains its sales staff to market Red Bull as a mixer to bars and clubs, through distribution of point of sale materials like Red Bull branded mini-fridges, bar mats and neon signs, and training bartenders how to execute the “Perfect Serve” a standardized way to serve a Red Bull and vodka drink. Red Bull also trains its guerilla marketing staff, called its Wings Team, to deliver Red Bull to parties on college campuses. “Red Bull’s total disregard for its own trade associations’ marketing guidelines, exposes the guidelines as nothing more than a paper tiger and makes clear the need for real regulation in this area,” said Cara Wilking, senior staff attorney at PHAI.

The ABA Should Stop Misleading the Public

The ABA acknowledged the dangers of combining alcohol with caffeinated beverages and marketing energy drinks as sports drinks when it issued its energy drink marketing guidelines. The ABA routinely references the guidelines when energy drinks are publicly criticized. In light of this report, to continue to tout its self-regulatory guidelines for energy when its member companies so openly violate them is potentially misleading to the public and regulators. “All of the information contained in the report released today is publicly available. Even the slightest accountability measures by the ABA would have found that two of its major recommendations are not being followed,” said Cara Wilking senior staff attorney of PHAI.