The commercial for Verizon’s NFL Mobile app begins with a noisy, crowded stadium and flashing camera lights. The quarterback calls out a play and makes offensive adjustments, and linebacker Clay Matthews counters by calling out his own defensive adjustment. The ball is hiked and handed off to the running back. Players run through a crowd of cheering fans on the field of play and then Clay Matthews lays a crushing tackle on the running back, jumps up, and flexes.

A voiceover comes on and states “Never be far from the game. Download NFL Mobile and watch live NFL games exclusively from Verizon. Never be without football.” During these few sentences the commercial cuts to a quick scene, about one-second in duration, of a man and a woman in a car. She leans from over him, from left to right, and shows him the live action football play that just unfolded on her mobile device. 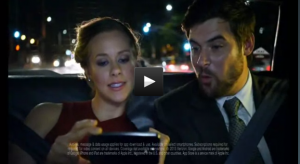 To most, this one-second visual of the man and woman in the car would not evoke much thought. But when looked at in the context of Verizon’s corporate responsibility pledge to eliminate distracted driving, the innocuous clip becomes somewhat more concerning.

Verizon boasts to have taken the pledge to eliminate distracted driving by partnering with Sprint and  T-Mobile  to promote AT&T’s “It Can Wait” campaign. The essence of the campaign is to raise awareness of the dangers of distracted driving. It also advocates that drivers take the pledge to refrain from texting and driving so as to eliminate distracted driving, making the roadways a safer place for all who use them. Texting and driving is a major public health concern as the combination of the two creates a 23 fold increase in the chance of getting into an automobile accident.

In his blog post describing Verizon’s contribution to the campaign, Jack MaCartney, the Director of Corporate and Community Responsibility, acknowledges “Taking our eyes off the road, our hands off the wheel, to send or read a text, email, comment, post, tweet, is an unnecessary risk.” While Verizon’s efforts to call attention to the dangers of distracted driving are commendable, the commercial described above indicates that Verizon may not be as in touch with its distracted driving campaign as it claims to be.

Although the man and the woman in the one-second scene in the commercial appear to be in the back of a cab or a friend’s car that may not be readily apparent to the audience at first glance. The man is sitting in the position that a driver would normally be, and the woman in the position of the passenger. At a glance, the commercial seems to be advocating watching live football in the car in a way that would take the driver’s eyes off of the road.  But, even assuming that the NFL  live video was confined to the back seat, the temptation for the driver to look back to see a play or replay could also create an unnecessary distraction.  AT&T, for example, has helped helped to vividly describe the consequences of inattention to the road in its commissioned film by noted directed Werner Herzog, “From One Second to the Next.”

The Verizon spot is reminiscent of a Beck’s Beer commercial that was cited and sanctioned by the FTC for violations of the FTC Act involving the combination of beer and sailing. The commercial depicted a number of passengers on the boat with a large bucked of ice containing bottles of Beck’s Beer. Almost all of the passengers held bottles of beer, with one passenger standing dangerously close the bowsprit, others sitting on the edge of the bow, and none of passengers wearing life jackets. The issue the FTC had with the commercial was that the advertisers depicted boating passengers as drinking Beck’s Beer while engaged in activities that require a high degree of alertness and coordination to avoid falling overboard.

In its complaint the FTC stated that as many as one-half of all boating fatalities are alcohol related, including an average of 60 recreational boat fatalities annually from falling overboard while drinking. Also it the its complaint, the FTC acknowledged that the company may be in violation of the Federal Trade Commission Act, the Beer Institute’s own Advertising Marketing Code, and federal and state boating safety laws. The After its investigation, the FTC concluded that Beck’s had violated the FTC Act with this advertisement and were sanctioned with strong oversight by the FTC of future advertisements involving alcoholic beverages and boats.

While Verizon most likely did not make the commercial with the intention of promoting unsafe behavior, the company was at best oblivious and at worst careless in its production of the commercial. Verizon should take care to ensure that all forms of media use while driving are eliminated, not just texting, as they all increase the risk of injury and death. The company should be more and aware and sensitive to the messages it promotes in its commercials concerning mobile media and the dangerous implications they may have.