A new Coors Brewing Company television advertisement called “Mutant Can” shows two scientists in a lab trying to find a way to improve the design of the Coors Light beer can. They then are shown in a movie theater watching The Wolverine (2013) and are inspired to improve the can by adding an “adamantium claw defense system”—a reference to the Wolverine’s special powers. The advertisement features clips from the upcoming movie.  Beyond the unimaginative dialogue and choppy editing one is left wondering: Why is a beer company using a PG-13 movie based on a popular comic book to promote its beer?  And hasn’t Coors made this mistake before? 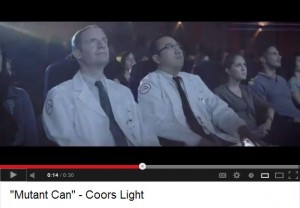 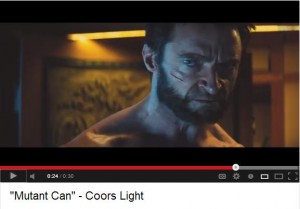 Fast forward ten years and Coors is at it again. While people associated with the film refused to comment to the media about whether or not the film would be rated R in the run-up to the official rating announcement, The Wolverine (2013), like the first film in the Wolverine movies series, recently received a PG-13 rating from the Motion Picture Association of America. Like it did ten years ago Coors will likely argue that it didn’t know what the rating would be when it agreed to sponsor the film. When asked about the use of PG-13 movies to cross-promote alcohol and alcohol product placement in PG-13 movies James Sargent, Professor of Pediatrics, Dartmouth Medical School noted that “alcohol companies told the Federal Trade Commission that they can’t help putting their products in movies aimed at kids because they can’t know how a movie will be rated beforehand.  That’s rubbish.  The youth market is too important for Twentieth Century Fox to risk an R rating for movies like The Wolverine; that’s why movie rating is part of the production contract (and why some movies make multiple trips to the ratings board).  Wolverine (and Coors) will be seen by masses of teens and many elementary school children as well.”

Coors Light is first on the list of the film’s promotional partners on the film’s official website and links to the Coors Light Facebook page (pictured below).

Coors produced the “Mutant Can” television commercial and publicizes its partnership with the movie on its Facebook page. In turn the Wolverine shared a picture of a shredded Coors Light beer can from the Coors Light Facebook page with its Facebook fans, though the post was hidden from declared under-21 Facebook users in the United States. 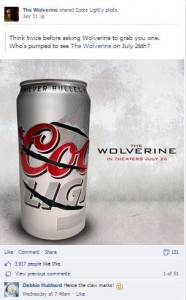 Coors’ obvious targeting of an under-aged audience is evident in the company’s choice to advertise through a popular comic book character. Logan, the Wolverine’s human alter-ego, is known to have struggled with alcohol abuse despite the fact that he is a mutant who possesses animal-keen senses, enhanced physical capabilities and a healing factor that allows him to recover from virtually any wound, disease, or toxin at an accelerated rate.

UPDATE: PHAI has submitted a formal complaint to the Beer Institute.