A Suffolk Country jury, after finding Lorillard liable on December 14, 2010  for the wrongful death of a woman who was given free Newport cigarettes by the company as a child growing up in a Boston public housing project, today issued a punitive damages verdict of $81 million against the maker of Newports.

The jury heard testimony from an economist and an accountant who discussed the assets of Lorillard and  its ability to pay.  The plaintiff called forensic economist Robert Johnson who testified that Lorrilard’s net sales this year came out to about $81 million for a 5 day work week.  He also noted that Lorillard was on track to make a profit of over a billion dollars this year.

The defense called local certified public accountant, Robert H. Temkin, who suggested that Lorillard’s ability to pay was less than what Johnson suggested.

The defense’s closing argument, delivered by Shook, Hardy & Bacon’s Walter Cofer, told the jury that, although he shares a name with his grandfather, they are not the same man.  Likewise, he reasoned, the Lorillard of today is not the same company that parked a truck next to a playground and gave free cigarettes to children.

The purpose of punitive damages is to punish bad conduct and deter future bad conduct.  Cofer argued that that because the tobacco industry is now regulated the the U.S. Food and Drug Administration, the regulatory agency will ensure that no future bad conduct takes place.  As for the punishment, Cofer analogized that it was sometimes necessary to “whack a mule on the rump” to get it moving in the right direction.  But, he said, once that mule was heading the right way, there was no need to keep whacking it. Lorillard now admits that its products are addictive and deadly, so “whacking it again and again is not necessary.”

Michael Weisman of Davis, Malm & D’Agostine in Boston told the jury that just because Lorillard is now subject to new federal regulatory authority, it does not get them off the hook for what they did and what they do not now do, like make a serious commitment to keep kids from smoking today.

The jury was instructed by judge Elizabeth M. Fahey to consider the character, duration, and nature of Lorillard’s conduct; the actual harm to the victim in this case; the the magnitude of the harm to potential victims in the future.  The jury retired to lunch and, about 90 minutes later, returned the verdict in the amount of $81 million, bringing the total liability in the trial to $152 million.

Judge Fahey has yet to rule on the question of Lorillard’s liability under Massachusetts consumer protection law, which could increase the defendant’s total liability.  Lorillard is expected to seek a reduction in the amount in its post-trial motions.  It will then likely appeal to the Massachusetts Appeals Couort, then the Massachusetts Supreme Judicial Court, and, if necessary, to the U.S. Supreme Court.

Mark Gottlieb, Director of the Public Health Advocacy Institute at Northeastern University School of Law, who was present for today’s hearing, noted that: “the total verdict of $152 million is currently the largest verdict in an individual smoking and health case. Larger verdicts in California and Florida were later reduced.  The jury’s message to Lorillard was clear:  ‘What was done to Ms. Evans was totally unacceptable.’  More cases involving addicting children with free samples will almost certainly be filed as a result of this case.”

Senior Attorney Edward L. Sweda, Jr., noted, “Today’s award of $81 million in punitive damages clearly reflects this American jury’s outrage at the predatory conduct of Lorillard Tobacco Company – conduct that was a legal cause of Marie Evans’ death from lung cancer at age 54.” 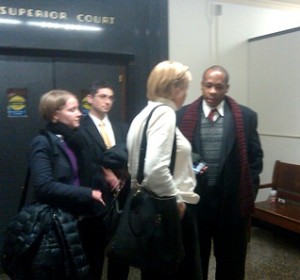 Plaintiff Willie Evans emerges from the courtroom after the verdict